Hide
What we stand for

Taking the lead in green energy 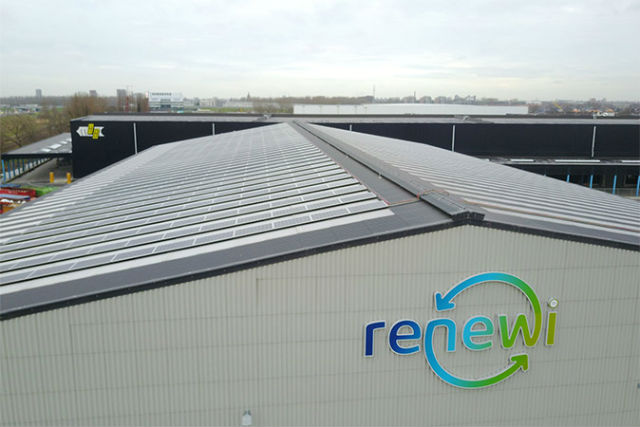 At two sites, in the Netherlands and the UK, Renewi is innovating in the production of green energy. Generating solar energy is one way we are doing this.

More than 1,000 solar panels have been installed at our Zoeterwoude site in the Netherlands. Together, they produce 260,000 kWh of green electricity annually, which exceeds the site's total energy use and avoids 170 tons of CO2. The idea for the project came from Joost van Gils, Safety, Health, Environment and Quality (SHEQ) Manager.

"Plans were in place for our new site in the location where we are now based," he explains. "One of the first questions I asked was whether we'd considered placing solar panels, and if so whether that was included in the construction plans."

Joost's suggestion was received with enthusiasm by Chief Executive Officer Peter Dilnot and Chief Financial Officer Toby Woolrych. "We arranged a tour of the site and discussed the idea with Toby and Peter," Joost remembers. "Their reaction was, 'Do it!' I really valued the way they embraced my idea and empowered us to make this happen and, of course, the business case was there as well."

The solar panels were supplied by Solar Access, and a government subsidy was obtained for their installation. The site has realised a CO2 reduction equal to the amount of electricity it uses, and surplus power produced is returned to the grid.

Meanwhile, Renewi's Waste Treatment Centre in Derby has secured green subsidies in the form of Renewable Obligation Certificates (ROCs), a government-funded financial support mechanism awarded by UK energy regulator OFGEM to argescale renewable electricity projects in the UK. They aim to increase the proportion of electricity supplied from renewable sources. The Derby Waste Treatment Centre will generate electricity both for the national grid and additionally to power the facility itself, making it self-sufficient.

The facility comprises a Mechanical Biological Treatment operation, a recycling plant and a gasification unit. All stages of the process create valuable resources from the waste. Up to 98% of the residual waste managed at the facility will be diverted to new raw materials, which will also generate enough green electricity to power approximately 14,000 homes.

James Priestley, Managing Director of Renewi's Municipal Division, says: "We are delighted to have been awarded this important accreditation, another significant milestone achieved in this project. Not only does this bring financial support to the project, it also shows how we are using innovative technologies to operate sustainably and create valuable products from waste. We are looking forward to completing the final stages of commissioning and to providing first class, sustainable waste services for the people of Derby and Derbyshire."

These are just two of the ways in which Renewi is affirming our commitment to addressing some of the main environmental problems facing society today: reducing waste, avoiding pollution, and preventing the unnecessary use of finite natural resources.