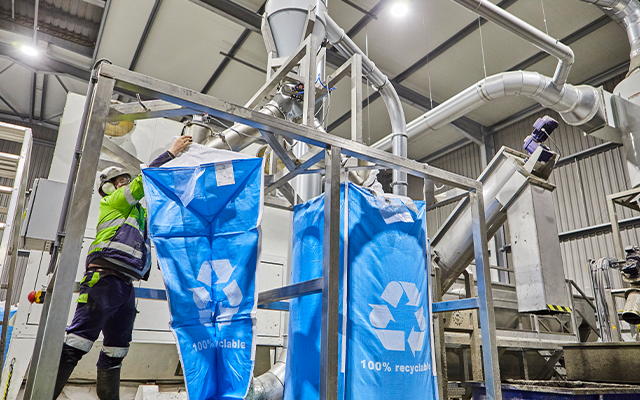 Solving the planet’s climate emergency requires a transformational approach from governments to reinvent the very fundamentals of their economies. Traditionally, economies have been linear. Products are made from primary raw materials, used once and then discarded as waste. This deeply ingrained model, however, is preventing climate progress.

Greater volumes of raw materials are being used to feed consumer demand every year, with 2020 hitting a peak of 100 billion tonnes, emitting 59.1 billion tonnes of greenhouse gases along the way. The objectives of the Paris Climate Agreement, though ambitious in themselves, will only accomplish 15 per cent of what’s needed to slow global warming. The other 85 per cent can only be accomplished by transitioning from a linear economy to a circular economy.

The circular economy has the power to shrink global greenhouse gas emissions by 39 per cent and to cut virgin resources by 28 per cent, according to the Circularity Gap Report published earlier this year. Following the philosophy of ‘reduce, reuse, recycle’, it’s a vital weapon in the climate battle, but it requires governments to rethink the concept of waste.

“In a linear economy, the price of a product does not include the negative impact the product has on the environment,” says Otto de Bont, CEO of Renewi, a leading waste-to-product company. “Products that are impossible to recycle are not necessarily priced higher than products that are easily recyclable because the price doesn’t include the cost of disposal. That's where the issue is. There's no penalty for bringing non-recyclable products to market.

“A more circular economy requires new thinking. We need to design with a view that the item itself can be recycled again, and using materials from secondary sources. Recycled materials have historically been seen as lower quality, but new technologies mean the difference is getting smaller and smaller. We can deliver products today that can easily replace virgin materials, but in some cases you might have to design slightly differently.”

Crucially, there is no place in a truly circular economy for burning waste, yet the UK government has invested and is investing heavily in transitioning from landfill to incineration. While this made sense two decades ago when those investments started – incineration has a better carbon impact than landfill and also produces energy – more recent technology has meant that, today, recycling is the better option, and finally cost-effective too. In 2019, 11.6 million tonnes of household waste was incinerated, compared to only 10.9 million sent for recycling.

Across the UK there are 48 energy-from-waste incinerators operating. Another 17 are under construction and councils continue to approve planning applications for new permits. Meanwhile, countries such as the Netherlands, Belgium and Germany, are racing ahead on the recycling front, with a progressive approach to carbon tax and reducing incineration. To keep up, the UK government must take a similar policy approach and invest in innovation.

“When you look at Northern European countries, the transition from landfill to incineration took place about 15 years ago, but in the last couple of years they have shifted away from incineration and towards recycling,” says de Bont. “The landfill rate in the Benelux nations is below 2 per cent now. In the UK, it's still around 20 per cent. The UK is doing now what was done in the Netherlands 10 to 15 years ago. The question is, why build all that incineration capacity today when you know the next step is not incinerating waste but recycling it as much as possible? There's a real chance to skip incineration and start recycling more today.”

In parallel to this shift, it’s important that the UK government sets clear targets for the use of secondary materials, as well as introducing policy, taxes or initiatives to create demand for them. Though these kinds of discussions are already taking place across the continent, much of the focus is on plastics, despite it only accounting for 100,000 of the 13 million tonnes of waste that Renewi collects. Circularity cannot be achieved by recycling plastics alone.

By recovering valuable streams and, through innovative processes and partnerships, recycling them, as well as increasing production of secondary raw materials, Renewi is helping to create a circular economy. The company currently delivers an industry-leading 66 per cent of materials recycled, which amounts to 7.9 million tonnes of waste being sent into reuse and 3.1 million tonnes of CO2 emissions avoided. Renewi is committed to increasing this recycling target to 75 percent by 2025, which will result in 10 million tonnes of materials being recycled and the production of over 1 million additional tonnes of secondary raw materials.

Renewi works independently and with partners to give new life to used materials, including teaming up with IKEA to invest in Retourmatras, a mattress recycler. Currently up to 1 million mattresses can be recycled per year in the Netherlands, with the next factory openings based in the Netherlands and Belgium set to increase this to 1.5 million. By introducing this mattress recycling solution, IKEA and Renewi are cutting levels of incineration.

“Circularity is an inherent factor of making economies sustainable, but we can’t achieve it on our own – we need partnerships such as IKEA, as well as the right government policy,” says de Bont. “In all cases, recycling makes environmental sense. The challenge is the cases when it doesn’t make economic sense. We can overcome that with new and more efficient ways to recycle, making it cheaper and in some ways competing with virgin materials.

“But when that's not possible, because collecting, sorting, cleaning and treating the waste is too expensive, we need taxation or other methods to make those streams economically viable to recycle too. If on a worldwide basis we can uplift recycling to 17 per cent by 2032, we are putting the world on a path to achieve 2 degree centigrade, slowing global warming.”