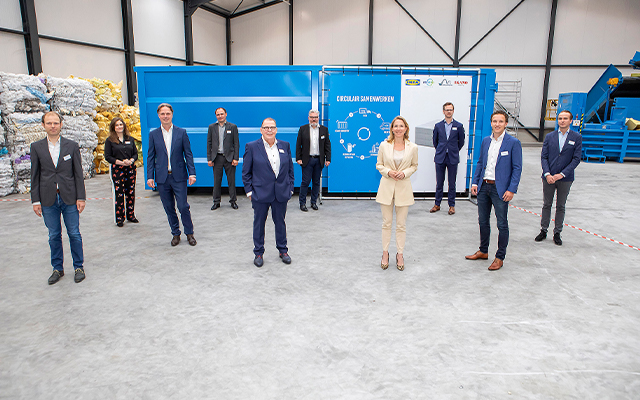 Etten-Leur, 5 July 2021 – Secretary of State for Infrastructure and Water Management Stientje Van Veldhoven opened the new mattress recycling factory of RetourMatras in Etten-Leur today and stressed the importance of sustainable mattress recycling in the Netherlands. The new factory has come about through close cooperation between RetourMatras, IKEA, Renewi and Ikano Industry. It is the fourth factory of RetourMatras in the Netherlands. With the total recycling capacity the parties are together able to recycle all the one and a half million mattresses discarded every year in the Netherlands into reusable raw materials. An important step in the direction of a circular economy.

Secretary of State for Infrastructure and Water Management Stientje Van Veldhoven: “3,000 times the Cathedral Tower of Utrecht. That’s how many mattresses we discard each year as bulky waste. For our planet and for following generations we can’t go on like this. In order to combat the growing mountain of waste, environmental pollution and CO2 emissions, we’re committed to a circular economy. From using and discarding things to reusing them. Congratulations to all parties involved. With this fourth mattress recycling factory you’ve shown that a circular economy works.”

Strong expansion of capacity
RetourMatras now has four mattress recycling factories in the Netherlands - in Alphen aan den Rijn, Lelystad, Zeeland (NB) and in Etten-Leur. Later this year there will also be an expansion in Lelystad, with a factory for a new recycling technique. There RetourMatras will apply a new technique whereby the foam from the discarded mattresses is fully recycled into raw material for new foam. With this development the four parties are working together towards a fully circular mattress.

Circular cooperation
IKEA is by far the leading seller of mattresses in the Netherlands, and this brings a great responsibility with it. Ingka Investments invested in RetourMatras in 2019, as did the waste-to-product organisation Renewi, which is responsible for collecting mattresses from all over the country and transporting them to the RetourMatras locations. In 2020 the group was joined by mattress producer Ikano Industry, which has already been working with recycled materials for years. By means of this circular cooperation the recycling capacity of RetourMatras has been expanded to 1.5 million mattresses a year - the solution for the great social problem of mattresses ending up in waste incinerators.

The Netherlands, at the forefront
With the cooperation with various stakeholders (government, municipalities, waste processing companies, retailers and recycling companies) RetourMatras shows how mattress recycling can be approached efficiently and profitably. The Netherlands is the European leader in mattress recycling, thanks to good cooperation the length of the chain.  This is partly thanks to the combining of forces of RetourMatras, IKEA, Renewi and Ikano Industry, which have supported this innovative approach and the result of this unique recycling process. By working together intensively, a tangible contribution is made to the achievement of the circular economy – and a real difference is made in addressing climate change.